An Ark and a Rainbow for All of God's Noahs

If you were with us at our Wednesday night Bible study, you may have seen it. God blessed us with quite a view. Thanks to Pat Pingry for taking this picture: 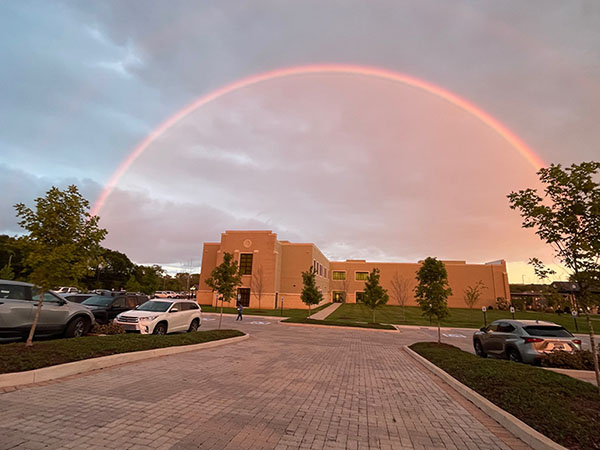 It’s hard to believe that it was only eighteen months ago that we moved into our new home at 6000 Pasquo Road. A lot has happened since then (that’s an understatement). But for those of you who were with us then, you’ll remember that the theme of our celebration dinner upon moving into our new home was that Stephens Valley Church is “a place of abundance.” That theme came from Psalm 66. There, the psalmist says to God, “You brought us into the net; You laid a crushing burden on our backs; You let men ride over our heads; we went through fire and through water; yet You have brought us out to a place of abundance” (vv. 11-12).

Indeed, many of us feel as though we’ve been through fire and through water. But for every fire the Christian faces, there is the ‘fourth man in the fire’ (Daniel 3:25). And for every flood there is an ark and a rainbow. The Puritan preacher Thomas Brooks summed it up well when he said that there is “an ark for every one of God’s Noahs” in Jesus Christ. There’s a rainbow for us too.

How can we respond to God’s grace to these undeserving Noahs? The psalmist tells us in the remainder of Psalm 66: “I will come into Your house with burnt offerings; I will perform my vows to You, that which my lips uttered and my mouth promised when I was in trouble. I will offer to You burnt offerings of fattened animals, with the smoke of the sacrifice of rams; I will make an offering of bulls and goats. Come and hear, all you who fear God, and I will tell what He has done for my soul” (vv. 13-16).

G.K. Chesterton once told a child, “Don’t believe anything that can’t be told in colored pictures.” The rainbow is only one such colored picture that calls us to faith in our great God. That’s one reason I look forward to seeing you all Sunday. The weather forecast isn’t promising a rainbow. But we will celebrate another, more powerful, colored picture of God’s covenant: the Lord’s supper. We will enter the house of the Lord with thanksgiving. We will sing songs that proclaim what the Lord has done for our souls. And we will once again hear the good news of Romans 8, and really of the whole Bible, that indeed there is an ark and a rainbow for all of God’s Noahs in the Lord Jesus Christ.

Posted by Heath Cross
8/20/21
in From Pastor Heath

I wanted to use this space to remind you that we’ll be kicking off our fall dinner and Bible study series this coming Wednesday. You can make reservations for next week’s dinner HERE.

For the first two weeks, we’ll be blessed by teaching from Dr. David Lawrence. If you’re new to SVC and aren’t familiar with Dr. Lawrence, this will be a treat for you. On week three, I’ll begin a six-week teaching series on “How to (Actually) Love Your Neighbor.” This is an issue that’s been at the forefront of our societal discourse for some time now. And it’s something I’ve thought about a good bit. Thankfully, though many would act as if it weren’t the case, God has given us clear direction on how He wants us to love our neighbor.

Reformed Christians confessionally believe that the Ten Commandments are God’s definitive rules for how we are to love God and love our neighbor. The Westminster Shorter Catechism summarizes it this way: In Question 42, we are asked, “What is the sum of the ten commandments?” Answer: “The sum of the ten commandments is to love the Lord our God with all our heart, with all our soul, with all our strength, and with all our mind; and our neighbor as ourselves.” The catechism writers were echoing the words of Jesus in multiple places where He summarized the Law of God (Matthew 22:37, Mark 12:30, Luke 10:27).

In Christ’s day, the Pharisees delighted in making up rules. I think human beings in general delight in making up rules. G.K. Chesterton once said, “If man will not live by the ten commandments, he will live by ten thousand commandments.” It’s a great quote that I often repeat. And it’s especially relevant now, when it seems that we wake up to new man-made commandments every day. Christians need to remember that Jesus’ approach was to simplify the Law rather than to complicate it.

None of us keeps the commandments perfectly. Our failure at keeping God’s Law is meant to show us our need of Jesus Christ as Savior. Nonetheless, as Samuel Bolton put it in his great book, The True Bounds of Christian Freedom, “We cry down the Law in respect of justification, but we set it up as a rule of sanctification. The Law sends us to the Gospel that we may be justified; and the Gospel sends us to the Law again to inquire what is our duty as those who are justified.” In other words, God’s commandments drive us to Christ’s gospel for salvation. Then Christ sends us back to the commandments to show us how to live with Jesus as our Lord.

Once we have established in our hearts that we’ll never be saved by keeping God’s Law, we are meant to realize that God’s Law is a means through which we can show our gratitude to our Savior by seeking to live as He lived. The Law of God, in light of the gospel, shows us how to fear God and keep His commandments (Ecclesiastes 12:13). It shows us how to do justice, love kindness, and walk humbly with our God (Micah 6:8). And, best of all, it’s not complicated (unless we choose to make it so). The world’s laws are complicated and endless. God’s laws can be written on something as small as a tablet of stone or a feeble human heart.

I look forward to this fall series. And I look forward to seeing you this Lord’s Day. It’s an honor each week for our church family to hear the Word of God read and preached, to confess our sins, to receive God’s forgiveness, to eat at His table, and to be sent into our new week with God’s blessing. Until then, may His blessing and peace rest upon you.

Posted by Heath Cross
7/16/21
in From Pastor Heath

I don’t understand how polls work and how pollsters get their data (I've never been contacted by a pollster myself), but I want to share some statistics I came across in an article that reported on “belief in God” among generational groups from 1988 to 2018. Here’s the chart: 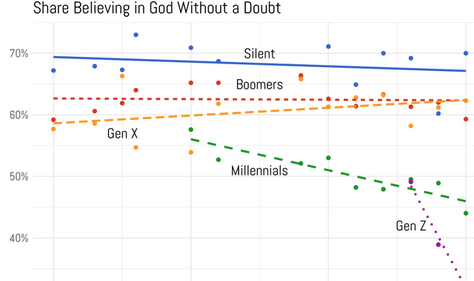 I don’t have the space to breakdown the defining characteristics of these three generations. But if I were to generalize in a stereotypical way, it would be something like this: Gen X is pessimistic, jaded, and sarcastic. Millennials are entitled and lazy. And Gen Z wants to stare at a cell phone screen all day every day. Again, this is a stereotype.

My old joke about this is that I’m a Millennial who only missed being Gen X by a couple of years. Therefore, I want you to acknowledge my sarcasm by giving me a participation trophy. And since I have two Gen Z daughters, I’m fine with them recording the participation trophy ceremony on their phones and posting it to TikTok. If you don’t understand, then you’re probably a Boomer (and I mean this lovingly). But I digress.

The main point I want to make in sharing this is to remind us, as a church, that while younger generations have a lower percentage of people who say they believe in God, that doesn’t mean that they are not using distorted versions of Christian principles as they search for meaning in life. And it doesn’t mean that they’re not worshiping false gods in ignorance.

Younger generations preach the themes of love, inclusion, acceptance, and justice. These are all biblical themes. But when they are separated from biblical context and substance, they become a shell of what they are meant to be and therefore become problematic. When I talk to people my age and younger, I try to make this point regularly.

One of my favorite ways of demonstrating this relates to the subject of love. How often have you heard someone try to justify sinful behavior by reminding us that “God is love?” (1 John 4:8). Yes, God is love. But this loving God also gave us His loving law. And this law is meant to dictate our behavior. If we are acting out of accord with, for example, God’s law in relation to human sexuality, then we are not acting out of love. We are acting in defiance of the law of the God who is love. In effect, when we let a human conception or feeling of 'love' dictate our behavior instead of the law of God, we are demonstrating what we really believe isn't that "God is love." Rather, it is that 'love is God.'  This never ends well. C.S. Lewis saw this 'love is God' trend in his day. He responded: “If Affection is made the absolute sovereign of a human life the seeds will germinate. Love, having become a god, becomes a demon.”

The same goes for justice. When justice becomes a god, it will become a demon. Inside and outside the church, the younger generations love to preach the message of "justice."And you'll even hear non-religious advocates of justice remind us that Jesus said, “Judge not, lest ye be judged.” Of course, they’re judging you as they say this. And they want Jesus to be a loving, syrupy God who never judges anyone anyway. In other words, they want justice apart from a God who judges. They want love apart from a God who gives us law. And they want tolerance and inclusion, but they won’t tolerate or include anyone who disagrees with them. They'll demand inclusion while joining campaigns to cancel people on Twitter. It’s a spinning hamster wheel of contradictions.

Like Gen X, hopefully the Millennials and Gen Zers will accumulate enough wisdom as they age to see their contradictions, repent, and seek after the Christ of the Scriptures (we can, and should, pray that this will be the case). In the meantime, our job and privilege as a church is to proclaim Christ, and His law, with the hope of that happening. Our gathering together as a church Lord’s Day by Lord’s Day is for the purpose proclaiming the only God who will never become a demon. The only God in whom mercy and absolute truth meet together. The only God who never contradicts Himself. The only God of true grace who delights to cancel our sin rather than cancel us. And the only God who doesn't really care how old we are or what year we were born. I look forward to seeing you Sunday when, once again, we’ll delight in the law of the Lord and focus on the only message that can change hearts (and change the charts): Christ, and Him crucified. May God bless you until then.

Our contributors may vary but our purpose is to provide thoughtful posts that will encourage, enlighten and inspire to the glory of God the Father.